1. We are committed to the fair resolution of complaints and grievances and to developing a culture that is based on mutual trust and respect. This policy provides a process for contractors or members of the public to raise a complaint or grievance with us.
2. Contractors or members of the public may from time to time have a complaint or grievance about a decision, behaviour, act, or omission that they feel is unacceptable. Whilst most issues can be resolved through direct discussion with the parties involved, there may be instances in which this is not possible.
3. This policy will be used in respect of all complaints and grievances made by:

4. This policy will not be used in respect of:

1. Complaint means an expression of dissatisfaction made to us about our services, decisions, actions, or conduct of our staff, or about the complaint management process itself. A complaint should contain sufficient detail to enable it to be addressed and recorded.
2. Complainant means anyone who makes a complaint. Complaints may be made anonymously.
3. Complaints and Breaches Register means the official record we keep of any complaints.
4. Contractor means an individual who undertakes a contract to provide or perform a service or works for the College.
5. Grievance generally pertains to unfair treatment or misunderstanding regarding matters pertaining to terms and conditions of employment or discrimination and harassment.
6. Member of the public means an individual who is not employed by Rehoboth, has not undertaken a contract for service or works with the College, is not a parent of students enrolled at Rehoboth, and is not a Member of the Association for Christian Education.
7. Resolution means an outcome of a complaint that is satisfactory to both parties.
8. Staff or staff member means an individual who is employed by Rehoboth Christian College.
9. The role of the Director as referenced in the Guide to the Registration Standards and Other Requirements for Non-Government Schools (January 2020) means that:
‘ The Director General of the Department of Education is responsible for ensuring that the school observes the registration standards, including the standard about its complaints handling system. Any student, parent or community member is entitled to contact the Director General with concerns about how the school has dealt with a complaint. Information is available on the Department of Education website. While the Director General may consider whether the school has breached the registration standards, she does not have power to intervene in a complaint or override the school’s decision’.

To ensure that complaints and grievances are addressed appropriately, we are committed to the following principles:

1. As far as is practicable, we will ensure the privacy, anonymity, and confidentiality of the complainant and any others involved in accordance with our Privacy Policy. Those involved in the process may waive their right to privacy and confidentiality if they choose to involve someone else in the process.
2. Confidentiality and privacy are subject to reporting obligations. Where this is necessary, the required information will be provided to the reporting body/ Information may also be disclosed where there is a legal requirement or grounds to do so.
3. Anonymous complaints are accepted in accordance with the Australian Privacy Principles and the National Principals for Child Safe Organisations. These are assessed, investigated, and resolved as completely as possible using the information provided.
4. In many cases, there are practical limitations as to how we can provide support to anonymous Complainants, ask for clarification, further information, or notify Complainants of any resolution. The College representative responsible for investigating the anonymous complaint will determine the extent to which the complaint will be investigated.

6. Confidential files on all complaints and grievances should be maintained and kept together and cross referenced with other files as necessary. The files should contain simple but clear notes of all conversations about source of dissatisfaction. This applies to friendly chats and to telephone conversations, as misunderstandings can easily arise. There should be a clear statement of what is concerning the Complainant or Grievance.
7. All complainants are requested to follow the stages outlined below.
8. Contractors and members of the public are asked not to write to the Board of the Association without first having tried to solve the matter either informally or formally as outlined in the stages below.

1. It is hoped that most complaints and grievances will be resolved quickly and informally.
2. The complainant will make a written record of all complaints or grievances that includes:

3. We will endeavour to resolve any informal complaints or grievances within ten working days of their being raised. However, if the matter is raised during school holidays, we will make all reasonable attempts to resolve it as soon as possible once the new school term has commenced (usually within ten working days).
4. Should the matter be resolved, we will take action to prevent similar situations in the future (e.g. improved communication, procedural improvements, professional development, etc.).
5. Should the matter not be resolved, or where parties fail to reach a satisfactory resolution, the complainant will be advised to escalate their complaint or grievance to Stage 2.

1. If the complaint or grievance cannot be resolved under Stage 1, then the complainant should communicate the matter in writing to the Finance Manager in a clear and courteous manner. Complainants should also identify how they wish the matter to be resolved.
2. Within three working days of receiving the written complaint or grievance. the Finance Manager will determine whether he or she is able to act as a mediator. If not (e.g. where the Finance Manager is the subject of the complaint or grievance), he or she will appoint a mediator (who may be internal or external to the College) to resolve the matter.
3. Within three working days of a mediator being appointed, the mediator will determine whether further investigation is required and will appoint an investigator if needed. The mediator may appoint another appropriate staff member (e.g. a Deputy Principal or senior teacher) to carry out further investigations.
4. The mediator and/or investigator will make reasonable attempts to speak to or meet with the parties involved within seven working days. If possible, a resolution will be reached at this step. However, if the complaint or grievance is received during school holidays or within two working days of their commencement the investigator will use reasonable means to speak to or meet with that parties as soon as possible after the new term has commenced (usually within seven working days).
5. The mediator will ensure that a written record of all meetings and interviews held in relation to the Complaint or Grievance.
6. Once the mediator is satisfied that, so far as is practicable, all of the relevant facts have been established, he or she will try to find an agreeable resolution between parties. Parties will be informed of this outcome in writing, with reasons provided. The written outcome should be provided no later than three working days after speaking or meeting with parties.
7. The College will keep a written record of all formal Complaints and Grievances, including records of meetings and interviews held in relation to the Complaint or Grievance, and the College’s decision, which record will be kept in accordance with the College’s policy for retention of records. Refer to our Records Management Policy for more details.
8. Where the complainant is dissatisfied with the outcomes of Stage 2 or has been unable to come to an agreeable resolution, he or she may escalate their complaint or grievance to Stage 3.

1. If the complainant seeks to invoke Stage 3 following failure to reach an earlier resolution he or she may address the CEO, in writing, requesting that their complaint be further considered by an independent Complaints Panel set up for this purpose.
2. This request for further assessment of the complaint or grievance will, for the purposes of this procedure, be known as an appeal.
3. Complainants must lodge their appeal in writing and within ten working days of the date of the Stage 2 outcome. The complainant should provide a list of complaints or grievances which they believe to have been unsatisfactorily resolved under Stage 2, along with the remedies sought in respect of each. The Independent Complaints Panel is only obliged to consider the complaint and/or grievance lodged in this initial submission. However, it may use its discretion to consider other matters it deems relevant or related that may subsequently arise.
4. Where the College receives the appeal, it will be referred to the CEO within five working days.
5. The CEO provides an independent source of advice on procedures for all parties.
6. The CEO will acknowledge the appeal in writing within three working days and inform the parties of the steps involved in Stage 3.
7. The CEO will endeavour to convene an Independent Complaints Panel hearing as soon as possible to consider the matter, normally no later than twenty working days after receipt of the appeal and dependent upon the availability of the Panel members.
8. The Independent Complaints Panel will comprise:

9. The following are entitled to attend a hearing, submit written representations, and address the Independent Complaints Panel: 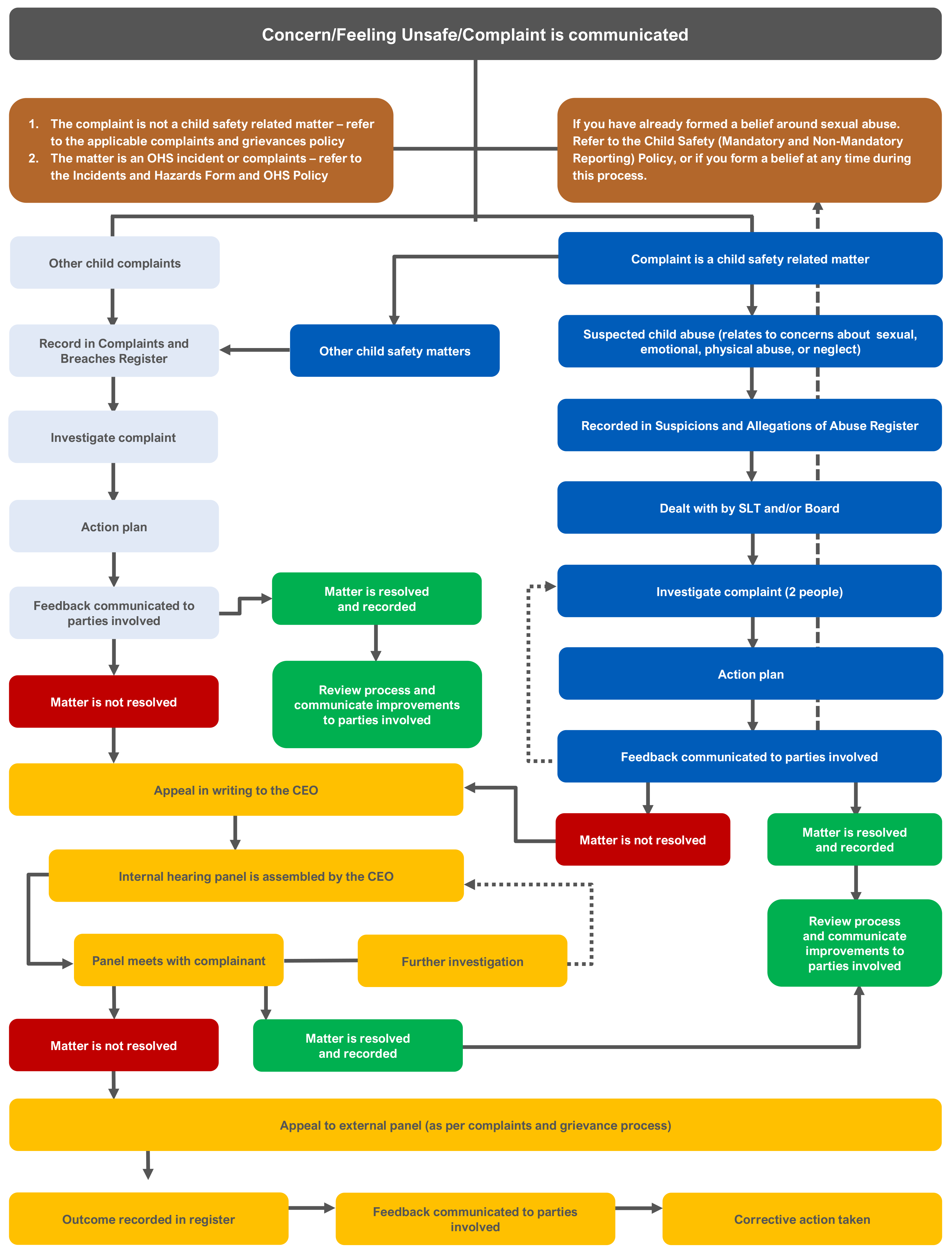 The Department for Child Protection is the State Government department responsible for issues specifically related to the protection of children, including the handling of abuse and neglect cases. Its website contains some excellent material for professionals, parents and friends.

For Reports of Abuse #

Child Family Community Australia (aifs.gov.au)
This site lists recent publications relating to information on child abuse that have been updated on the website of the National Child Protection Clearinghouse.